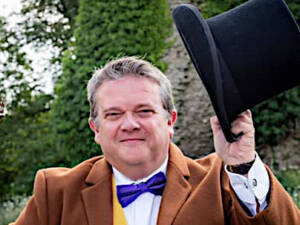 This incredible rags to riches story reveals how a Rhondda valley boy running his grandmother’s milk round, became one of Britain’s most popular actors of television and film.

A self­-confessed hell­raiser in his youth, he often spent time with his brother Donald and drinking friends in Stanley Baker and Richard Burton, mixing with East End villains like the Krays.

Glyn made his film debut as the cheeky cockney barrow boy in Dirk Bogarde’s The Blue Lamp. Since then his acting prowess has seen him appear in every conceivable role, from the first on­screen lover of Joan Collins in Turn The Key Softly to the aged father of Anthony Hopkins in Heartlands.

Members will remember Dean Powell’s hugely entertaining talks on The Life of Dr William Price and The Land of Song.  We are very pleased to welcome Dean back for another talk.

Dean Powell is regarded as one of Wales’ most popular guest speakers and has entertained audiences for more than twenty five years. He is a widely acclaimed journalist, author, broadcaster and vocalist.

He is the author of sixteen history books including the biography of Dr William Price and the memoirs of actor Glyn Houston. As a former BBC journalist and award­-winning newspaper editor, his anecdotes of interviews given with the likes of Hollywood greats Gregory Peck and Joan Fontaine have made him a firm favourite as a guest speaker.

Dean is the Manager of Llantrisant Guildhall, a restored 14th century Grade II Listed building which has been transformed into a heritage and visitors centre. He is also the Clerk to Llantrisant Town Trust which manages the rights and the lands of the Freemen of the town.