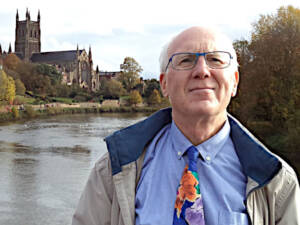 The Sunday evening programme has always attracted a large audience and is one of the longest running factual series on British television.

Typically over 2,000 people will arrive on the morning of a valuation day to have their precious objects assessed by some of the country’s leading experts.

How does this mass of material and crowd of eager participants become sifted down to around 20 on-screen people each discovering something about their most distinguished offering?

What are the ingredients for a successful Roadshow conversation?

Mike offers insights into the mechanics of capturing viable footage and how this is edited into an engaging visit to a handsome location on every occasion.

Mike worked as a director, producer and scriptwriter for ITV companies and the BBC.

He was Producer of the ITV network’s children’s programming presentation and promotion in the 1980s; then a factual programmes Director for the BBC in Birmingham and Bristol with credits for ‘Antiques Roadshow’, ‘Bargain Hunt’, ‘Flog It’, ‘Music Live’, ‘The Really Useful Show’ and ‘Top Gear’.

In the name Robert Arley, he has written a fresh evaluation of military flying in World War Two, covering all six years of the war in all major theatres: Of Sons and Skies.