Music before the Microchip 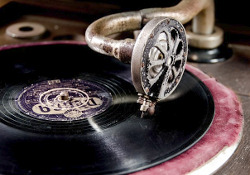 ‘Music Before The Microchip’ gives a reminder of how our parents, grandparents – and often we ourselves – used to listen to recorded music. You will see a variety of instruments gallantly willing to perform for you, dating from around 1910 to 1960. The recordings, which cover the same kind of time-span, will follow a theme, which could be called ‘Aboard the Orient Express’ in that they all have an Eastern connection which testifies to the long-lasting (if not very well-informed) interest, for both ‘serious’ and light music, in the Arab world, the Indian sub-continent and the Far East. Expect a few gongs.

A report of the meeting by Clive Barrett is available to download.

Hugh Parry has been a literature tutor in adult education for thirty years or so, but, in ‘Music Before The Microchip’, he wears the hat, or fez, of his alter ego, The Sheik of Shellac. This is a sideline which contains a warning, since it shows how a casual hobby can grow like a triffid. Music or literature, though, the aim has always been the same: to share a pleasure. He has lived in mid-Wales for a few years, and is a member of Aberystwyth U3A.