My Life at the Poles 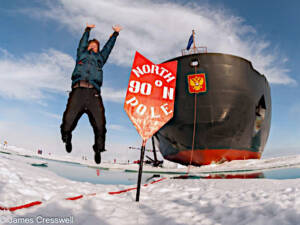 James Cresswell will tell us about his travels in the polar regions while working in the expedition cruise business. He made many trips to Antarctica and South Georgia, including to the Ross Sea in east Antarctica. In the Arctic he has guided in Canada, Greenland, Iceland, Jan Mayen, Russia, Svalbard, and the Geographical North Pole. His talk will also cover the wildlife of the polar regions.

James’ life of travel started when he was just 16: he won a travel scholarship from his school and went to Malta with a friend to study sea grass.

While at Bristol University studying geology he spent his summer holidays doing voluntary projects which included conservation work in the Hawaii Volcanoes National Park, an archaeological dig in Slovakia and community work with the Inuit in West Greenland. It was in Greenland that his love for the polar regions began.

His first employment was in the television documentary industry as a researcher on a Discovery Channel geological series, following which he was part of the BBC’s ‘Blue Planet’ series.

Away from geology and travel, he is a keen fly fisherman and is Membership Secretary for the Usk Fishing Association.