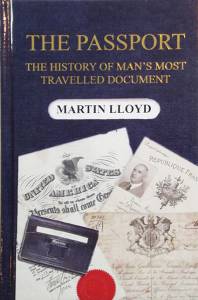 Thrill to stories of how three passports have played their influential role in the course of history: an attempted assassination which altered the regulations for issuing passports; the capture of a spy which caused a worldwide modification to the design of the document and for one person the passport itself which turned into a killer.

At the request of the speaker, this meeting will not be available via Zoom.

Martin describes himself in his blog as a Writer, Speaker and Cyclist.  He first came to national notice when, on BBC Radio 4’s programme, Midweek, he enthralled listeners with his accounts of the history of the passport whilst comfortably patching over the hole left by an absent programme guest, much to the relief of the presenter – after all, this was live radio.

He left HM Immigration Service after 24 years to concentrate on his writing and it was while engaged in research for his book, The Passport, the History of Man’s Most Travelled Document, that he uncovered the three interesting stories which he will be presenting in his talk, Passports, Assassins, Traitors and Spies.

He is often heard on radio or seen on television; he has been on BBC’s You and Yours, The One Show, News 24 Hours and Making History and when the blue passport was introduced recently he was obliged to race around the country to deliver eleven television and radio interviews in the space of twelve hours.

He now has eleven titles published, covering romance and thriller fiction, travel humour and history and you will have the opportunity to purchase a selection of his books at discount after his talk.