The Sinking of the Lusitania 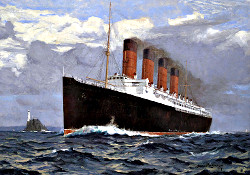 A report of the meeting by Clive Barrett is available to download.

Malcolm was born in Wales and during his early years he attended school in Abergavenny. He later gained a degree in Pharmacy from the University of Wales. He has always had a keen interest in Art, History and Music. His work has taken him to many parts of Britain before returning to Abergavenny to work in a local hospital.

Following his retirement he has been able to develop his interest in Music and Art to give illustrated lectures to inform and entertain mixed groups of people such as Rotary clubs, U3A, Probus, Church groups, WI’s, and Art groups including Abergavenny Art Group. For the past 3 years he has given presentations on Cruise ships sailing to destinations from Tahiti to St Petersburg, Cape Verde and the Canaries to Scandinavia.